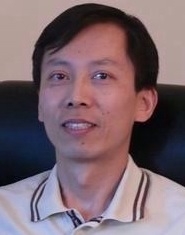 Abstract: Singlet oxygen plays a critical role in a large number of applications including photodynamic therapy of cancers, photodynamic inactivation of microorganisms, photooxidation, and photodegradation of polymers. We report a general strategy to improve singlet oxygen production via resonance coupling between surface plasmon of nanoparticles and photosensitizing molecules. The resulting hybrid photosensitizers have demonstrated markedly enhanced singlet oxygen production under both visible light and near-infrared light excitations even for those photosensitizing molecules without near-infrared absorption, as compared to the free photosensitizing molecules of the same concentration. Subsequently, they have shown exceptionally high photoinactivation efficiency against both Gram-positive and Gram-negative bacteria, including the drug-resistant strains, and cancer cells under a wide range of excitations, including the near-infrared light. The results offer a platform to develop more effective and efficient hybrid photosensitizers for broad-spectrum photodynamic therapy.