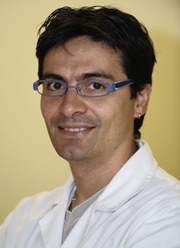 Conjugated systems based on fused aromatic and heteroaromatic rings constitute the family of heteroacenes. The infinite variety of possible structures represents an endless source or novel organic semiconductors. In this regard, carbazolocarbazoles, resulting from the fusion of two carbazole units, belong to the subgroup of pyrrole-based azaacenes. These hexacyclic molecules admit several structural geometries. Accordingly, due to the critical influence of the molecular structure on the solid state packing and the subsequent charge transport, a series of carbazolocarbazoles have been synthesized with the aim of studying the effect of isomerism on the electronic properties of these polyheteroaromatic molecules.

Dr. David Curiel received his degree in chemistry from the University of Alicante in 1996. Then he moved to the University of Murcia where he obtained his PhD in 2002 working in the synthesis of ferrocenyl-substituted heterocycles. Since 2002 to 2004 he worked as a Marie Curie Postdoctoral Fellow at the University of Oxford (UK) focusing his research in the preparation of interlocked structures via anion-directed self-assembly. In 2005 he moved to the University of Sydney (Australia) to work as a Postdoctoral Researcher in the synthesis of metalloporphyrin-based dyads and triads for the study of charge separation processes used in the exploration of artificial photosynthesis. Back in Spain, during the period 2006-2010 he was contracted as a research fellow of the “Ramón y Cajal” Program at the University of Murcia, where he continued working in the area of anion recognition and sensing. Currently, he holds a position as a Contracted Lecturer and Researcher at that institution. His research interests are included in the areas of supramolecular chemistry and, more recently, in the synthesis of molecular materials for its application to organic electronics.